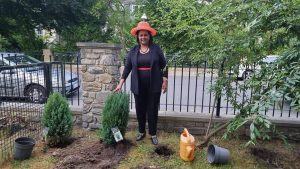 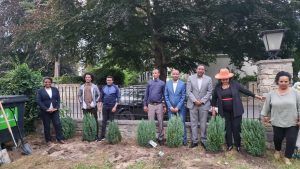 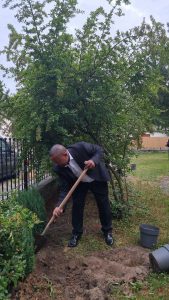 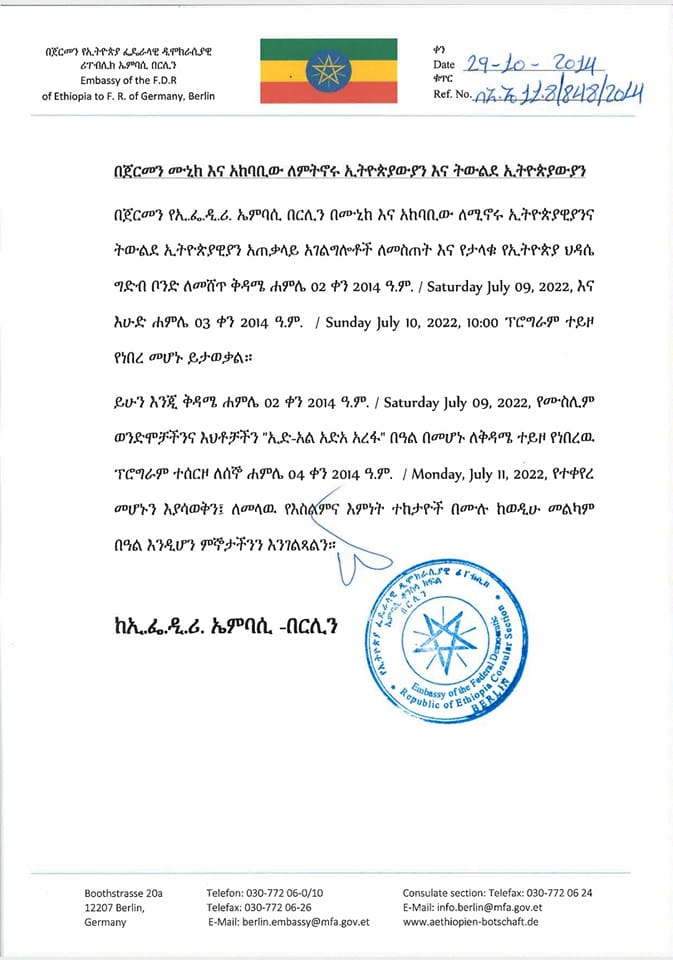 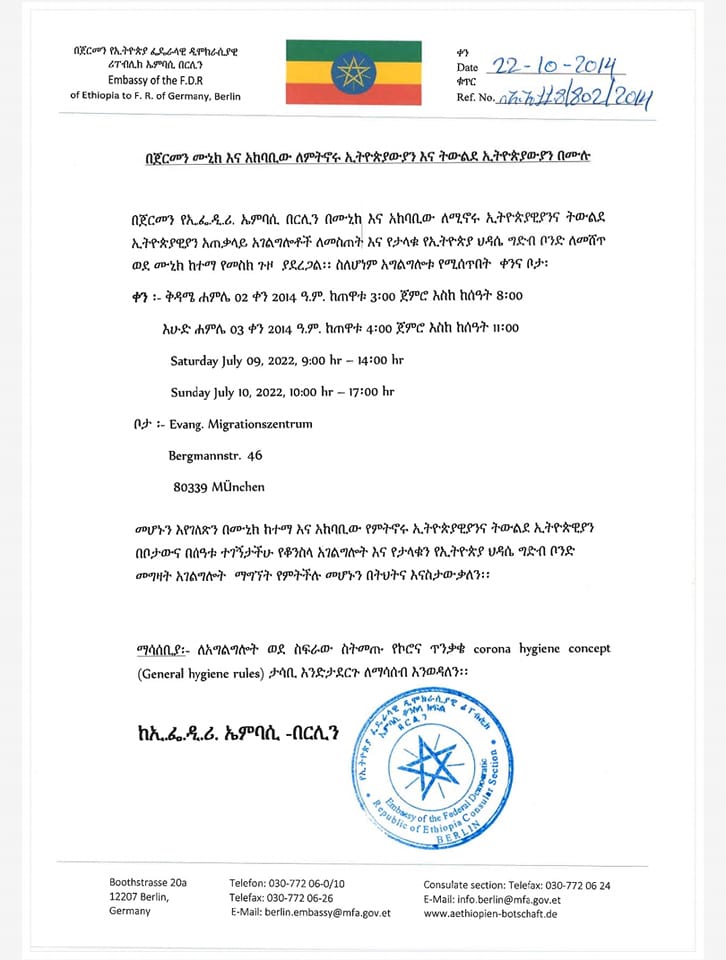 Ethiopia day was celebrated at the residence of H.E. Ambassador Mulu Solomon Bezuneh Special Envoy, Ambassador Extraordinary and Plenipotentiary of the Federal Democratic Republic of Ethiopia to the Federal Republic of Germany, Czech Republic, Republicof Poland, Slovak Republic, and designate to Ukraine. On the occasion more than 200 guests were in attendance. Among these were Honorable parliamentarians, government officials, media personalities, think thanks, the guest of honor Dr Gunter Nooke former advisor of the chancelleryon African affairs and Director for Africa at the Federal Ministry for Economic Cooperation andDevelopment, H.E Ambassador Mahamed Mohomud Brahim Kahlil, Dean of AfricanAmbassadors in Berlin (Ambassador of Mauritania),Dean of Ambassadors in Berlin, Dean ofAmbassadors of other regions, Ambassadors in Berlin, friends of Ethiopia and Ethiopians. The occasion had commenced with the National anthem of Ethiopia and Germany and wasfollowed by the speech Her Excellency Ambassador Mulu Solomon Bezuneh. H.E. AmbassadorMulu had started by thanking the guests for attending the celebration and expressed deep sorrowfor Ethiopians who lost their lives currently and at different times by those who are agents ofterror and wished strength for the families in these difficult moments. She highlighted thesignificance of celebrating Ethiopia day and how the world views Ethiopia as the cradle of humankind and a nation that was never colonized. H.E stated that Ethiopia/German relations startedback in the 15th Century and Ethiopia had always played a special role in German conscience. Her Excellency further stated in current times Germany is a major trade and investment partner inEurope for Ethiopia and share the concerns of terrorism cross border crimes, human traffickingpoverty etc. Ambassador Mulu then thanked the German Government for an ongoing support forEthiopia, especially for being a reform and development partner. H.E also briefed the participants about the current efforts by the Ethiopian government toundertake deep structural reform in judiciary, economy finance, telecom and democratizationprocess for example about having the first ever democratically elected government and the greenlegacy of H.E. Dr Abiy Ahmed that planted 16 billion seedlings. She also mentioned about thechallenges that include reform resisting agents who are working to dismantle the country andexternal foes that fuel the conflict in the country, fake news, misinformation, and disinformationcampaigns. In addition H.E. mentioned that the government of Ethiopia has taken commendable measures to rebuild infrastructure and allow unfettered access to humanitarian aid and declared a halt to the conflict, made humanitarian cease-fire and the whole inclusive national dialogue.
The guest of honor Dr Gunter Nooke on the other hand expressed that he is delighted to have been invited to speak on behalf of the German government and stated as the second most populous country in Africa Ethiopia’s stability development and politics shapes the prospects of East Africa and influence the broader sub-Saharan Africa. He affirmed the fact that the German government follows events in Ethiopia very closely and stated that there is a spark of hope that can be seen to end the conflict in the northern Ethiopia as a humanitarian cease fire is in place.He further stated that the government of Germany sees readiness by all sides to embark on the path to peace and underlined the need for a broader national dialogue for the path for peace to be fruitful. He underlined the strong partnership between Ethiopia and Germany thanks to the existing open and critical dialogue and cooperation among the two countries. After a speech by the guest of honor a cake cutting ceremony was conducted by Her Excellency,women Ambassadors and guest of honors,Mrs Frehiwot Mekonnen the area manager of Germany and Central Europe at the Ethiopian Airlines had briefed the participants on the services Ethiopian Airlines gives and the new facilities it has built to serve its customers all over the world. Ethiopian Airlines had sponsored two free flight tickets and an accommodation at the sky light hotel in Addis Ababa Ethiopia therefore a lottery drawing ceremony was conducted before the program was concluded. It was announced two lucky European gentlemen had won the ticket and received their award.The event had show-cased Ethiopian traditional food, Ethiopian traditional coffee ceremony and Ethiopian wine as well as art exhibition and traditional music which drew the attention and curiosity of the guests. 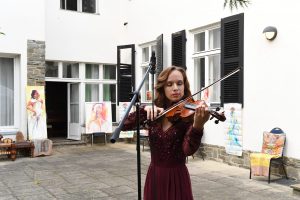 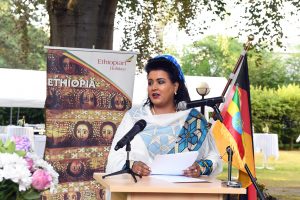 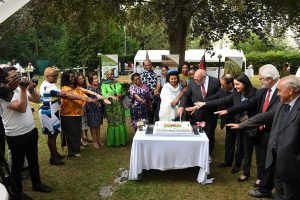 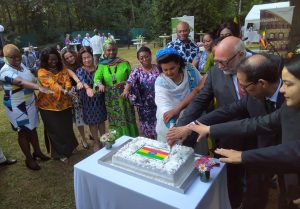 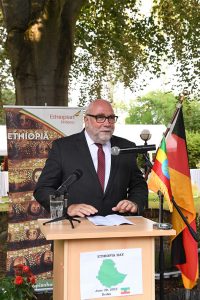 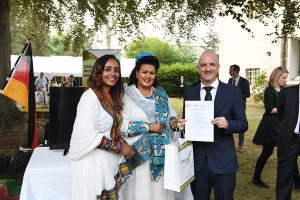 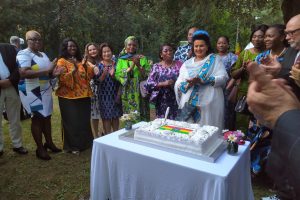 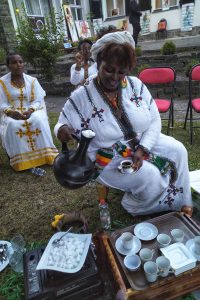 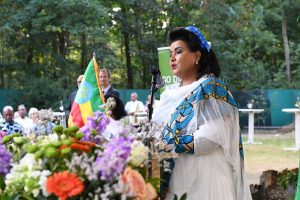 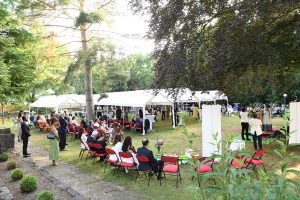