Deputy Prime Minister and Foreign Minister Demeke Mekonen had a phone conversation today (June 16) with the Foreign Minister of Germany, H.E. Ms. Annalena Baerbock.
The Deputy Prime Minister and Foreign Minister appreciated the balanced position that the government of Germany has followed in the challenging times Ethiopia has been through for the last one and a half years, which commensurate with the longstanding relationship between the two countries.
He also briefed the German Foreign Minister about the encouraging measures that the government of Ethiopia has been undertaking to cope with the challenges.
He said the Ethiopian government has traveled the extra mile to end the conflict with the Tplf peacefully, mentioning the release of political prisoners from detention, the establishment of the National Dialogue Commission, and support given to the peace initiatives of the AU headed by H.E. Olusegun Obasanjo.
Humanitarian supply to conflict-affected regions is accelerated, demonstrating the Ethiopian government’s adherence to building trust and ensuring durable peace in the country, he added.
The German Foreign Minister, on her part, appreciated the steps taken by the Ethiopian government to scale up access to humanitarian supply, ensure accountability for abuses during the conflict and hold an all-inclusive dialogue to address critical questions in the country.
Ms. Annalena Baerbock pledged that the government of Germany would strengthen its development partnership with Ethiopia and support peace-building, rehabilitation, and reconstruction efforts of the Ethiopian Government.
She said Germany would play a positive role in normalizing the relationship between Ethiopia and the European Union.
source :
The Ministry of Foreign Affairs of Ethiopia 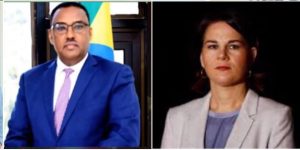