The Government of Ethiopia will carefully examine the content of Amnesty International and Human Rights Watch’s report on allegedly committed crimes in Welkait. A cursory look at the report indicates that it covers sensitive political changes in the country, peace and security, and internal boundary matters, in addition to so-called findings on grave allegations of human rights. It makes allegations of ethnic cleansing, war crimes, and crimes against humanity.
The Government of Ethiopia is committed to holding accountable all those responsible for violations of human rights and humanitarian law. It is for this reason the Government established the Inter-ministerial Taskforce following the publication of the Joint Investigation by the Ethiopian Human Rights Commission and the UN Office of the High Commissioner for Human Rights. The Taskforce has held its second meeting today issuing various directives to expedite the investigation process. The investigating teams will closely examine this report and give it due consideration.
The Government, however, questions the validity of numerous political matters the two organizations felt necessary or in their remit to address. Firstly, matters of internal boundaries are dealt with by constitutionally mandated bodies. It is unwise for the activist organizations to pass judgments on such matters. They would know their report will now be used for political purposes. This attitude is certainly not acceptable. They failed to exercise due diligence.
The Government is also concerned about the ethnic undertones of the report that seem to apportion blame disproportionally while trying to exculpate others. This fuels hatred and makes reconciliation and healing more difficult. Responsibility is individual. All those responsible for the alleged violations will be held accountable. Sensational and journalistic reporting discredits the bulky report. Simply blaming one group does not serve the cause of human rights and peace. Other weaknesses in the report are also very apparent. They rely largely on alleged testimonies from certain groups. The Government investigation team will examine this report despite such fatal weakness and unfair attack against the gallant forces of ENDF and allied forces.
This report comes after the indefinite humanitarian truce came into effect and aid has started to flow to the Tigray region. The Government expressed hope that this will lay the foundation for genuine efforts to end the conflict peacefully. The report unfortunately strays into making recommendations unhelpful for any peace effort. Nonetheless, the Government reiterates its commitment to seriously examine all allegations of violations of human rights and humanitarian law and make its findings public. 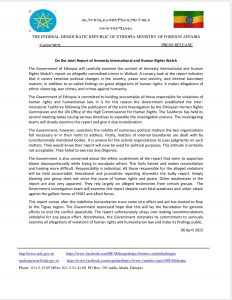