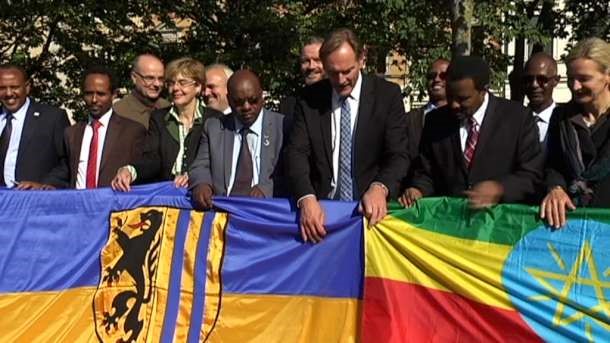 On Tuesday morning, 29 Sep.2015, near new town hall the space between Brüderstraße and Leplaystraße was christened Addis Ababa Square. This is intended to anchor the partnership between the two cities. Since 2004, Addis Ababa and Leipzig cities are linked by a twinning. The mayors of the twin towns acknowledged so that the more than ten-year partnership. This has resulted in a variety of relationships are in the field of politics, education, economy, and in culture and civic exchanges. The Inauguration was Accompanied by brass music of the Leipzig School of Music Johann Sebastian Bach the square near the New Town Hall was baptized the Ethiopian capital.

Worldwide Leipzig city has 14 sister cities. These include the Ethiopian capital, Addis Ababa.

Since March 2010 there is in the Ethiopian capital Addis Ababa to “Leipzig Square”. Now the exhibition center moved to and anchored the twinning in the cityscape. In the presence of the two heads of city green area between Leplaystraße and Brüderstraße was named Addis Ababa court.

For identification of the square brass plate with the inscription “Addis Ababa-Platz” and the silhouette concise structures of the African metropolis are mounted on a plurality of banks. In the future, Ethiopian artist will decorate the place.

In addition both mayors signed an action plan for future cooperation. Before the ceremony, a meeting took place in the New Hall, there you put the areas from where you want to collaborate in the future. Driba Kuma Thanked the administration and people of Leipzig for the warm welcoming accorded to him and his delegation.

“I think that’s a good sign when we perform on the city level, this bridge to Ethiopia, supported by the citizenry. We talk so much about refugees, about the development of the past months and years, and if you are not specifically trying every day to make this bridge, it will come as a result to prejudices and stereotypes. And so on an equal footing to meet and maintain the friendship with each other, that is the right answer, “said Burkhard Jung.

“This is the administrative, management support on our part in establishing a functioning municipality. This is concretely the issue urban development. Perhaps the most surprised us, but in Addis Ababa, the city wants to develop a zoo. The Zoo can simultaneously implement urban planning objectives, develop public transport, organizing the transport links that organize the road layout. For us, perhaps unimaginable, but life from the four million the Addis Ababa, certainly three and a half million have not seen any wildlife, “explained Burkhard Jung.

German Companies Encouraged to Invest in the Health Sector in Ethiopia